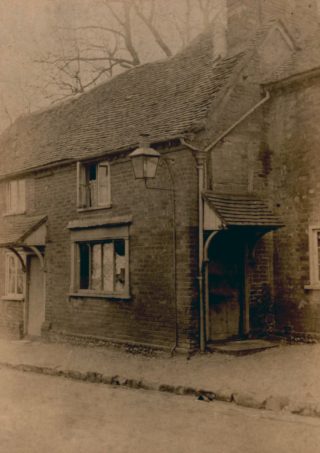 In the early 1900s, as you entered Beaconsfield from High Wycombe, you would pass Wattleton Pond on the left and climb the slope at the start of Wycombe End. The cottages on the left side of the road in those days started just beyond the pond and continued up Wycombe End to the beer house called the Prince of Wales, currently (2016) called the Old Bengal.  Mrs Eliza Leslie occupied two of the cottages in the row leading up to the Prince of Wales beer house.

At 4 o’clock on the morning of Thursday 4th January 1912 a destructive fire broke out in the cottage occupied by 68 year old Mrs Eliza Leslie, her sons William, David and Ernest and her 13-year-old grandson James Snuggs.  Mrs Leslie was awakened by a noise downstairs, and thinking that someone was in the house, knocked at the wall to rouse her sons.   Meanwhile James Snuggs, who slept in her room, got out of bed and opened the door but found the lower room full of flames and smoke. He tried several times to get through the door but was seriously burnt on his face, arms and legs.

William Leslie woke his brothers who made their way down stairs by a different route to the kitchen. David opened the door and found the room alight. They all ran out to the rear of the house where David smashed a window and started throwing water onto the fire while William went to raise the alarm.

Meanwhile Mr Dick Hinton, landlord of the Prince of Wales, had grabbed a ladder and climbed up to the bedroom window. The bedroom was full of smoke and Mrs Leslie was by the window but when Mr Hinton tried to get her out she pulled away and went back to her bed to get some money she had left under her pillow. She then cried out that she was suffocating so Mr Hinton went through the window and felt around on the floor until he found her. He picked her up, got her through the window and with a little help managed to get her down to safety.

When Mr Hinton first got to the window he could hear Snuggs in the bedroom but was unable to see him through the smoke so he told him to stay in the room and he would come back for him but as he came down the ladder with Mrs Leslie he saw the stairs door open and Snuggs rush towards the street door which was fastened.  Hinton shouted to Luke Lake who was nearby with David Leslie putting water through the kitchen window, telling him to break through the street door. Lake broke through the door but could only get into the room a yard or so due to the heat.  He tried several times eventually getting in about 8 feet where he found Snuggs lying face down on the floor. He scooped him up and took him to his cottage where Dr Turner attended to the boy before taking him to The Prince of Wales.  The following day James Snuggs was taken to the Cottage Hospital at High Wycombe where, unfortunately he died of his injuries at 10.30 pm.

A Coroner’s Inquest was held at the Commercial Hotel, High Wycombe on the evening of Monday 8th January 1912 where a verdict of death by burns accidentally received was passed and the possible cause of the fire was put down to the flame of a lamp setting fire to some Christmas decorations which were on a beam in the kitchen ceiling.

In 1912 Beaconsfield Volunteer Fire Brigade consisted of a Chief, L.W. Myers and 11 men and the Fire Station was situated at 35 Wycombe End, currently (2016) a two bedroom house called Jacks Barn. The main body of this house being constructed on the footprint of the old Fire Station.

On the day of the fire the volunteer brigade turned out with their hose reel and extinguished the fire under the command of Deputy Captain E. Jezeph but it appears there was a delay even though Mr Fletcher, the Fire Brigade Secretary had made it known that the fire alarm bell, used to call the brigade, was fitted on the door of the Fire Station and could be operated by breaking the glass front.