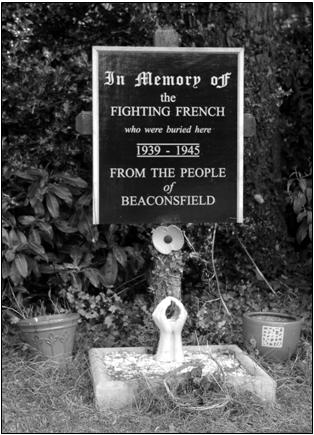 Memorial to the Free French 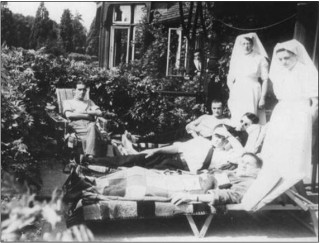 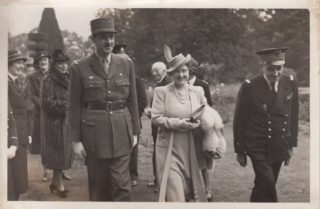 Between 1941 and 1944 Beaconsfield became a recovery centre for members of the Free French forces. Many of the 600 or so were submariners suffering from TB; they were nursed at Highfield in Grove Road, then known as the Lannec Sanatorium. Butler’s Court became a convalescent home for ‘other ranks’ and Westmorland House in Burkes Road provided accommodation for officers. Grove
Ash, on the corner of Grove Road and Burkes Crescent, was also used. Queen Elizabeth, the wife of George VI, visited Butler’s Court on 27 October 1941 accompanied by General De Gaulle and other dignitaries, an occasion on record as a DVD in the Society’s archives.

Thirty four of these Free Frenchmen died, all but two of them from TB. The other two were involved in motoring accidents, caused probably by their drunken state and the fact that the lights on cars were minimal as an Aid Raid precaution. All thirty-four were buried in the Shepherds Lane cemetery for the period of the war, after which eleven were returned to their home towns and others were interred in the Brookwood Military cemetery.

Through the records of the Beaconsfield and District Historical Society, the son of one of these men, who had never met his father, was able to visit the grave in 2007 and say ‘Adieu’