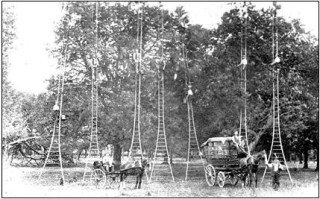 Seeleys Farm was originally part of the Gregories Estate and probably took its name from the Cely family who lived in Beaconsfield in the 16th century. When John Waller died in 1726 the Gregories Estate was broken up and Seeleys Farm was sold to the Curzon family, remaining in their ownership until the early 20th century when Earl Howe (family name Curzon) began to release land for building purposes.

In the 18th century Seeleys was one of around thirty farms and holdings in Beaconsfield with a mixture of arable and pastoral farming, the growing of wheat and the rearing of cows, pigs and sheep being the main activities. By 1881 the farm covered two hundred and eight acres and employed nine labourers.  The land in Beaconsfield and the surrounding parishes was particularly suitable for growing cherries.  In 1892 Job Wooster planted 18 acres of cherries at the farm so that by the early 20th century Seeleys had one of the largest orchards in the area.   During the fruit picking season they employed up to sixty people, and each evening the cherries from Seeleys and other local farms would be sent by rail from Beaconsfield to markets in the Midlands. However, cherry growing  became an increasing problem because the guns used to scare the birds away disturbed people in the nearby residential areas. When the direct rail route to the Midlands was discontinued and the fruit would have had to be sent via London, the business became impracticable and in 1960 the orchards were sold for development.

The farmhouse was initially built in the 16th century and evidence of the dates 1572 and 1693 can still be found in two of the rooms. The house in its original state had some unusual features including a trap door in one of the bedrooms opening directly into a stable, presumably providing an easy escape on horseback, and reputedly used at one point during the Civil War. Its association with the artist, Sir Joshua Reynolds, also makes the house interesting historically. He stayed at the farm when visiting his friend, Edmund Burke, and whilst in Beaconsfield he fulfilled a commission from Catherine II, Empress of Russia, to paint an historical picture. He chose as his subject ‘The Infant Hercules Strangling the Serpents’ and the model he used was William Rolfe, the six month old son of a local family. Today the original painting still hangs in the Hermitage Museum in St Petersburg.

In 1950 the farmhouse became a Grade II listed building. Since then the interior of the house has been modernised and the barns converted into private dwellings. Nothing now remains of the original farm following the gradual sale of land, but at least the name of Seeleys is retained in the large housing estate that now occupies the once flourishing cherry orchard.  In 1973 information was lodged with Buckinghamshire County Council that there are possible remains of a medieval or post medieval moat or a water filled boundary ditch at Seeleys Farm, but so far no documentary evidence has been found to support this.