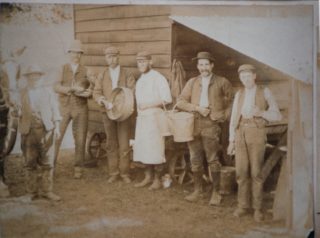 Whites Farm, now known as The Grange, lies to the north east of Beaconsfield, to the west of the A355 and close to the parish boundary.  For hundreds of years it formed part of the hamlet of Coleshill at a time when Coleshill was an enclave of Hertfordshire within the county of Buckinghamshire.  As a result the owners of Whites paid tithes to the rector of Beaconsfield, hearth tax and land taxes to Hertfordshire, and a chief rent to the lords of the manor of Amersham.

The farm was probably named after a farmer called “White”.  However, the earliest record of it is in 1443 when Thomas Ballard and his wife Philippe conveyed their “mansion of Whites in Hertfordshire” to John Boteler whose grandfather Hugh de Berewyk had, in his day, been the principal land owner in Beaconsfield.

In the second half of the 16th century a family called Warren lived at the farm.  John, the head of his family, died in 1609 and is buried in St Mary’s Church.  In the nave there is a stone slab with a brass plaque to his memory.  It reads “Here resteth the body of John Warren of Whites Farm who lived in marriage with Elizabeth his wife 23 years and by her had issue 4 sons and 2 daughters.  He died being aged 60 years, the 16th December 1609”.

No description of the old dwelling house at Whites has come down to us but the Tithe map shows that it was a pretty large building.  In 1662 the occupant, Dorothy Brown, paid tax on six chimneys.  She died in 1665 and John Brown paid the church rates on Whites Farm in 1678.  It is not known how long the Brown family lived there but long enough, it seems, to have given their name to Brown’s Wood.

In the middle of the 18th century Whites was purchased by James Gallopine, a citizen of London who used the farm as a country retreat.  When he died in 1763, he left money to the minister and elders of the Congregational Church in Beaconsfield.  The farm passed to his son Daniel Gallopine and then to Daniel’s two sisters, the wives of Thomas Hall and Joseph Stevenson.  Thomas owned Harpsden Court in Oxfordshire, and Joseph, like his father-in-law, used Whites as his country home.  He died there in 1808 leaving his son his share of the farm.  He also gave £100 to the Congregational Church in Beaconsfield, “whereof my son-in-law John Geary is now pastor”.

The descendants of James Gallopine continued as the owners of Whites until 1840 when it was sold to William Dawkins, a gentleman then living in London but who had been born in Northamptonshire.  The farm consisted of 110 acres of farmland, 86 acres of woods and coppices, and land forming part of a farm known as “the second part of Poland Green Farm”.  Dawkins lived at Whites with a housekeeper and three servants.  One of the people he employed on the farm was William Bates, who occupied a cottage and a small amount of land at Poland Green.  Dawkins was a founder member of the local Board of Health and also played a part in the setting up of a National School in the town [Beaconsfield].  He died in 1868.

In his will Dawkins appointed two land agents to be his Executors, Charles Ferris Biggs of Upper Sydenham and James Gurney of Chalfont St Giles.  He gave money to close relatives and to his housekeeper.  The rest of the estate he bequeathed to his great nephew Charles Neville Biggs.  This included the freehold dwelling house, farm and lands “called The Grange, now in my possession and occupation, formally called Whites Farm”; the freehold lodge or tenement built by him at the entrance to The Grange [aforesaid] and his freehold cottage and garden at Poland Green.  It also included the furniture and contents of the house, the farming stock, growing crops and farm implements.

Charles Neville Biggs and his father Ferris made two important changes at The Grange.  The old dwelling house was pulled down and a new house built in the grounds.  The estate was also enlarged by purchasing Red Barn Farm on the other side of the A355.  George Henry Wood, a gentleman from Liverpool, was the first person to live in the new house.  He employed a Mr Hawkes as the farm bailiff.  In 1888 Charles Sage took up residence.

20th Century to the present day

At the beginning of the 20th century the estate was sold to Mrs Tamzen Williams, the widow of a colliery owner from Lancashire.  In September 1908 her daughter Frances Bromfield Williams married Percy Frank Chaplin at St Andrew’s Church, Marylebone.  Mrs Williams died two years later.  At the time her daughter and son-in-law were living at a house called Barnhurst, about half a mile from The Grange.

Mrs Williams appointed her two children to be the Executors of her will.  To her daughter Frances Chaplin she gave her land at Holwall in the County of Hereford and a house known as The Saxons at Chesham Bois Common in Amersham.  Red Barn Farm was left to her son John Bromfield Williams and his heirs with the proviso that if he died without issue it was to go to Frances and her children.  The remainder of the estate, including The Grange, was to be held in trust for the benefit of the two Executors and their heirs.  Mrs Williams left instructions that they were to pay the mortgage debt now owing on the security of The Grange “to the entire exoneration of the said property”.

John was killed in Flanders during the First World War and in 1919 the Chaplins decided to put the whole estate on the market.  The auction was handled by Messrs Constable and Maude of Davies Street in London.  Lot No. 1 consisted of the main residence, with lounge, hall, 3 reception rooms, 14 bedrooms, 2 bathrooms, domestic offices, stabling, a garage, a cottage, 2 lodges and extensive farm buildings.  All this came with about 150 acres of agricultural land and 72 acres of woodland.  Mr Roberts, dairyman and farmer, had the lease of the home farm on a yearly tenancy.

Lot 2 was Red Barn Farm, a “capital bungalow residence” with farm buildings, woodland, pasture and arable land amounting to 121 acres.  Lot No 3 was Whites Hill Lodge with about 7 acres of woodland and Lot 4 was Barnhurst, described in the brochure as a “picturesque residence” with a lounge, 3 reception rooms, 5 bedrooms, stabling, garage, tennis lawn and 24 acres of land.

The man who made the successful bid for Lot No 1 was (John) Harry Guy, a Quaker and a Price Waterhouse trained accountant.  In his youth he went to the United States where he met and married his Danish-born wife Gerda, and became an American citizen.  He returned to Britain in 1916 in order to serve in the Ambulance Corps.  In 1922 he became the finance director of John Mackintosh and Sons Ltd. and held that post until he died.  His wife, Mrs Gerda Guy, after whom Gerda’s Walk  in Brown’s Wood is named, ran the dairy farm.  Milk and ice cream were sold in shops in the Old and the New Town [Beaconsfield],  and under her management, the farm prospered.

Harry Guy died at St Joseph’s Nursing Home in Beaconsfield in 1955 and the estate was advertised for sale the following year.  It was described as an “Exceptional Freehold Residential and Farming Property of about 226 acres situated two miles from the station and the shops.  A medium sized house of Quality and Distinction….. beautifully sited facing full south and approached by a long drive…..New Model Farm Buildings for T.T. Attested Herd and fine old Tithe Barn …. and three detached cottages”.

Since then The Grange has passed through the hands of a number of owners, including Ken Bates, the chairman and owner of Chelsea Football Club.  In the 1980s the house was extensively modernised with an indoor swimming pool and self-contained flat.  When the estate was offered for sale in 1996, the asking price was £3.75 million.  The estate could be bought as a whole or as separate Lots.  Lot No. 2 was Wood Cottage; Lot 3 was Bridleway Cottage.  The ice cream business was not for sale and was to be relocated.

For 50 years or more the whole farm was used for dairying but since about 1996 it has been used for arable rotation, mainly wheat and barley.  However, there is no farm as such at Whites Hill today.  The farm buildings have gone, and the fields are ploughed  and harvested by a farmer who lives in Homer Green.  The present owner of the estate is Lord Swraj Paul who came to Britain from India in 1966.  He made his money in the steel industry, has 2 sons and 1 daughter, is a Privy Councillor and a Freeman of the City of London.