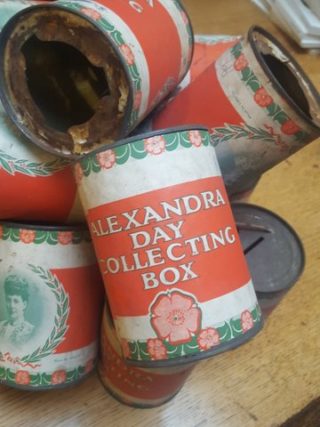 It never ceases to amaze the Society where items come from and for how long they’ve been gathering dust, or in this case rust, in the attic of Beaconsfield Town Hall.

Where for instance did these Alexandra Day Collecting Boxes come from and why were they left empty in the attic? There are about fifteen and, from the design, appear to date back to the late 1930’s. Queen Alexandra was the popular Danish wife of King Edward VII, who had first arrived in England for her wedding in 1862. Fifty years later, in 1912, as the Dowager Queen, she and her friends were searching for a way of marking what would have been her 50th wedding anniversary to the late king.

During a visit to her native Denmark earlier that year she had come across a priest who was raising money for the needy by selling roses grown in his parish garden. Inspired by his actions, she returned to London with the idea of launching her own “rose day” to helping the sick and poor of London. To do this she engaged the help of “John Groom’s Crippleage and Flower Girls Mission”, a charitable venture for destitute, orphaned and disabled girls from the poorest parts of London. This charity had originally been set up in 1866 to train girls to produce flower displays but by 1912 had moved on to manufacturing artificial flowers for which there was a burgeoning market. It was these small artificial silk flowers that Queen Alexandra asked them to produce for her “Flag Day”, the first of its kind in Europe.

The first “Flag Day” in June 1912 was a phenomenal success. 10,000 roses were produced, and raised the equivalent of £2.8m in today’s money which, in turn, was given to the hospitals of London. During the following years and throughout the First World War the day was a major event in the London summer season with Queen Alexandra as the star. By 1920 the annual Flag Day had raised the equivalent of over £30m in today’s money, all of which went to supporting London’s Hospitals.

The present day Alexandra Rose Charities, http://www.alexandrarosecharities.org.uk continues this charitable fundraising work amongst the poor in London; in 2016 specialising in a project to promote healthy eating amongst poor children.

Who in Beaconsfield was responsible for these collecting tins and where did the collecting take place? How much was raised each year? What other charitable fund raising efforts took place between the two wars? Do you remember these events?

If you can offer any information on these matters please let the Society know.

References
Further information on the Alexandra Rose Charities is available at the London Metropolitan Archives http://www.aim25.ac.uk/cats/118/19200.htm.