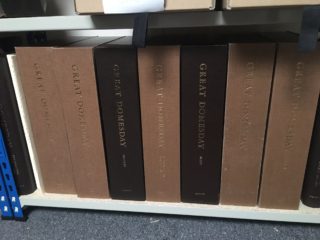 The beautifully bound copy of the Domesday Book

The entry for Burnham 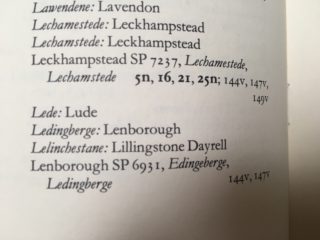 Lude, not Beaconsfield, is the only local entry

The Beaconsfield & District Historical Society has extensive archives which are kept, courtesy of the Council, in the Town Hall.  The Beaconsfield Archive Group meets every Wednesday in the Library where volunteers help to conserve, digitise and catalogue this ever-increasing archive in order to make it available to the community.  The Society’s web site now contains an increasing wealth of articles on the town and its history and plans are afoot for a permanent home so that the Archive can be fully accessed.

Among the Society’s artifacts is a complete facsimile edition of the Domesday Book, printed in 1985, on paper made by Wiggins Teape to celebrate the 900th anniversary of Domesday.   Originally the acid free paper was to be produced in the USA but the company was able to manufacture 500 tonnes of the paper for this special project at its mill in Stoneywood in Aberdeen – ironic as the Domesday Book doesn’t include Scotland!  Wiggins Teape has a long association with Beaconsfield as its research facility was at Butlers Court, before it was converted to residential use in 2010, and Glory Mill in Loudwater was one of their original paper making plants.  This facsimile edition was kept in the Library at Butlers Court and was gifted to the Society when Wiggins Teape closed down.

Beaconsfield is not mentioned in the Domesday Book.  The nearest entry to Beaconsfield is Lude [Farm] which has four households, 3 mills and was very small.  Why isn’t there a record of Beaconsfield itself?  We know that there as probably a church and a good supply of water which would indicate a settlement. However, it is thought that it is not mentioned because it was part of Burnham Abbey which, according to Domesday, was very large and consisted of thirty seven households which probably included those at Beaconsfield.

It is tempting to speculate that like other places in the country it was omitted because of the consequent tax that may have been levied, but there is no evidence to support this theory or that our local inspectors were anything but honest and could not be bribed!