You are here: Home>Beaconsfield History>Featured items from the Archive>Nurse's Uniform from the Second World War 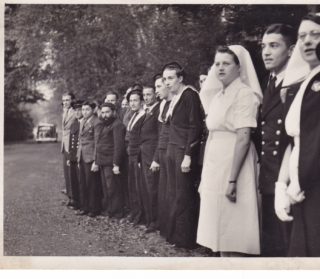 One of the more unusual items in the Archive is a nurse’s uniform worn during WW2 by Edith Slingerland, who lived in London End. It was kindly given to the Society in 2012 by her son. Edith was a member of the Voluntary Aid Detachment of Red Cross and St John Ambulance who worked with the Free French army casualties, many of them submariners, who had TB and who were stationed at Butlers Court whilst recovering from their illness. Nurses were not allowed to socialise with their patients although many friendships were formed.