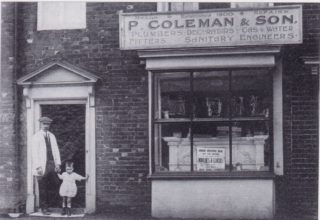 Percy Coleman and his grandson standing at the door of his shop in London End.

This is Percy Coleman, born in Beaconsfield in 1865, pictured with his grandson Harold Wood in the doorway of his shop in London End in the early 1920s.  Where he is standing is now part of Pizza Express.  The Coleman family were born and bred in Beaconsfield and Percy was the son of Mr Coleman who owned the drapers, clothier and boot store at 35 London End, the sign of which is one of our items in the Archive.  It seems that Percy was not keen to follow his father into the shoemaking trade and struck out in the newly developing trade of plumbing and gasworks, servicing the rapidly changing world of the early twentieth century.

The premises became the Puffin Tearooms and, more recently, was incorporated into the premises of Pizza Express.