You are here: Home>Beaconsfield History>Featured items from the Archive>The box belonging to William Baring DuPre 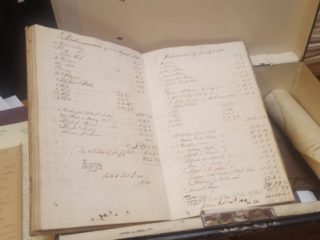 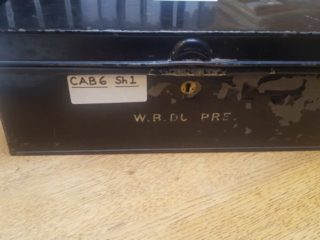 One of the artefacts in the Archive of the Beaconsfield & District Historical Society is a black tin box, with lock, which could have been used by travellers in the 17th or 18th century to transport valuables or deeds on a stage coach.  They may have hoped that a highwayman wouldn’t notice the box beneath their seat. The one in the collection also has an interesting past.  It carries on it the initials W.B. DuPre and it is believed to be the box originally used by one of the Wilton Park estate bailiffs during the later part of the 19th century.

Found by chance in a rubbish pile waiting for collection, the box and its contents could have been lost to the world were it not for a sharp eyed neighbour who spotted it and asked the then owner if they could have it.  After inspection, its value to the history of the town was recognised and it was donated to the Society. Among its contents is the Wilton Park housekeeper’s Account Book of 1807-1817 as well as an album of photographs of the wedding, in 1928, of Margarie, eldest daughter of William Baring DuPre. Both these records are now in the archive catalogue under the Wilton Park Collection category and will be available for inspection once the records have a permanent home.

(A shorter version of this article was originally published in the Local Directory magazine in March 2016.)