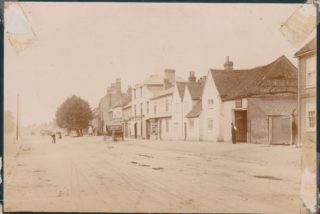 The Workhouse Act of 1722 permitted the building of workhouses and those applying for relief had to enter one of these in order to gain relief. Authority for the construction of a Poor House in Beaconsfield was given at the vestry meeting of 11 July 1759 to the churchwardens and overseers of the poor – the latter being David Anthony of Anthony’s Farm, later known as Wattleton Farm, and David Grove. They were also given power to finance this from general rates, many of which were raised during the subsequent years. However, these proved to be insufficient and, in 1768, a 99-year lease at £7 p.a. was taken on a building in London End, then owned by Edmund Waller, which previously had been The Chequers Inn.  The Chequers Inn had reached a poor state of repair and a loan of £200 was also taken out at an interest rate of 4½% from Mr William Fellows, a mealman [sic] of Wooburn to pay for the necessary work.

On completion Richard and Mary Jennings moved in as Master and Mistress of the Poor House on 1st September 1769 at a salary of £20 per annum. A physician was appointed by the overseers to provide ‘proper physical medicines for such poor’ and a nurse was employed to care for the sick, although her assistance was not required when one of the inmates was capable of doing this. Inmates were also required to keep the house clean, with the proviso that refusal could result in confinement or loss of meals.

There are few records surviving, but the inventory of 1785 gives the names of the 20 males and 12 females in residence and similar details are available for 1786. It has been concluded that the ground floor consisted of a hall, a kitchen, a room for the Master, a pantry and a brew house; upstairs there was a long chamber with 10 straw beds and 10 beds and bolsters, 6 smaller chambers each equipped with a few beds, and the Master’s room in which there was a “sacking-bottom bedstead with blue curtains”. Many other items are listed, including details of individuals’ clothing.

There were, of course, strict rules. Dinner, normally soup, was to be served at 1 o’clock precisely. Grace was to be said before and after meals. Meals were to be times of silence. Bread and beer were also served, but were not permitted between meals; in 1774 one quart of beer cost the poorhouse four pence. The beer was for the inmates, who were not permitted to have spirits – such luxuries were for the Master only. Attendance at morning and evening service was also obligatory ‘for those able to go to church’.

Adults and children had to earn their keep. Generally, children were bound as apprentices, some when they were only 7 years old. Girls were normally taught housewifery, although one Elizabeth Rowlinson was sent to London to become a milliner. Boys were to learn a trade. They were provided with new clothes to start their apprenticeships, an expense on the Parish, or occasionally from one of the trusts, such as that of Lady Anne Hyde. Girls who remained unemployed took up lace making, according to Julian Hunt, one of the storerooms in the workhouse was known as the ‘Silk Room’, and their products were sold to lace merchants such as Stephen Woodbridge who in 1779 was renting a house also in London End. Lace making was a common occupation for women in Buckinghamshire towns. In 1773 women in the workhouse were paid 5s 10d. for making lace and their output was then sold making the workhouse a tidy profit. In 1774 Beaconsfield’s overseers of the poor received £7 4s. 6¼d. for lace made by girls in the workhouse. Unskilled labour on farms was also a way of earning money, although the inmates were only permitted to keep one penny of out every shilling earned. Adults were ‘let to farm’ with farmers bidding for the labour of paupers who were obliged to do whatever the farmer required.

Changes in the law

The Poor Law Amendment Act of 1834 saw the end of the Poor House. Large groups of parishes came under the administration of a single Board of Guardians which was empowered to provide one or more workhouses to accommodate the paupers within its boundaries and thus remove this burden on individual parishes. A workhouse was built in Amersham and the Poor House in Beaconsfield was therefore no longer needed. The building became the property of Mr Charsley in 1837, and was eventually demolished.  The site subsequently became that of The Children’s Convalescent Home, then Peter Knights and is now (in 2016) Knights furniture shop.