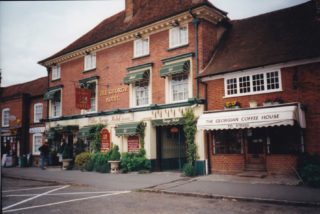 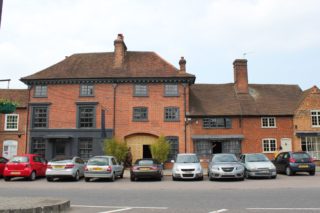 The George Inn was one of the original coaching inns of Beaconsfield, situated in Wycombe End on the main coaching route from London to Oxford. As a coaching inn it provided food, drink and accommodation for travellers as well as stabling for horses. Carriages and saddle horses could also be hired from the inn.

The building is timber framed, originally infilled with wattle and daub, but due to decay was refaced with a late 18th century brick façade. The front of the inn was again altered at the start of the 20th century, and in 1950 it was given Grade II listed status. At the side of the building the characteristic archway through to a courtyard, used by carriages and for stabling the horses, continued to exist until the recent conversion of the building to an upmarket restaurant and hotel and renamed ‘The Crazy Bear’. Unlike most renovated coaching inns, the exotic and eccentric interior décor makes it difficult to appreciate its more traditional history.

History of ‘The George’

There is some dispute over the earliest reference to ‘The George’. There are records to suggest the existence of a George Inn in 1487, but this may refer to an inn in London End later called ‘The Bull’. However, the building in Wycombe End certainly dates back to the 16th/17th centuries and there is evidence that it operated as an inn by the middle of the 17th century. Initially ‘The George’ was owned by the Warren Family before the lease was sold to the Sills in 1668, remaining in their family for almost one hundred years. By 1762 the inn had been renamed ‘The Chequers’ because the original Chequers inn in London End had fallen into disrepair and closed, the reason for this change probably being to retain the goodwill of their regular customers. It did not revert to its former name until the early 19th century.

With the arrival of the rail service to Oxford the coaching trade had almost ceased by the 1840’s, and it became increasingly difficult to earn a living from running the inn. Indeed, the incumbent landlord from 1869 to 1883 was forced to continue his earlier occupation as a hairdresser. However, the fortunes of ‘The George’ improved considerably when the first Lord Burnham bought the Hall Barn Estate and invested heavily in reviving the economic life of the area. ‘The George’ continued to operate as a public house through to the beginning of the 21st century when it was converted to its current use.