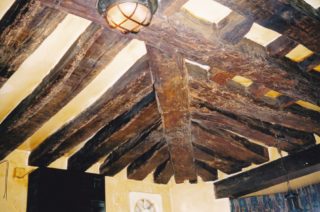 There has been much debate over which is the oldest inn still in business in Beaconsfield.  Recent research suggests that it is the Saracen’s Head, first mentioned obliquely in the will of an innkeeper in 1510, and then by name in 1545.  However, there is also written evidence to suggest that an inn existed on the site, on the corner of London End and Windsor End, as far back as 1242.

According to legend it was given its name at the time of the Crusades.  It is said that Richard Coeur de Lion stayed here, and after a particularly heavy drinking session, wreaked havoc with his battle axe, later paying for the damage and giving permission for the inn to be called ‘Ye Royal Saracen’s Hedde’.  Whatever the truth behind the story, the name ‘Royal Saracen’s Head’ still appears on the side of the building today.

It is known that William Basil of Wilton Park bought the Saracen’s Head in 1738 for £576, and forty years later the Wilton Park Estate, including the freehold of the inn, was purchased by Josias Du Pre and remained in the hands of the Du Pre family until well into the 20th century.

Originally the building was a jettied (first floor projecting) timber framed house which was probably re-fronted in the late 17th century.  In 1893 the inn was rebuilt and the exterior given its now familiar mock Tudor half-timber appearance.  Today the interior has been tastefully modernised retaining much of its original character, and there are still many genuine original timbers which were discovered during renovation work. These include an archway, currently standing in the bar, which is thought to be around 350 years old and probably formed the gateway to the courtyard for the coaches.  There is also an excellent example of a dragon beam which supported the corner of the overhanging floor.

Changing Role of the Inn

By 1724 the Saracen’s Head had become an inn with rooms, and throughout the coaching era the Oxford coaches stopped here to change horses and enjoy the hospitality.  It is believed that part of the current building was at one time used as a Coroner’s Court, and at a later date during the 19th century, the inn was regularly named in newspaper adverts as a place where sales particulars relating to houses for sale or rent could be inspected.  It was also important as a meeting place, and in 1874 became the venue for promoting the cause of the London, Beaconsfield and High Wycombe Railway (although it took over thirty years for the railway to eventually come to Beaconsfield!)  By the late 19th century the Saracen’s Head was described as ‘a family and commercial hotel and posting house’.  Today it no longer provides accommodation but remains a thriving public house with an attached restaurant.