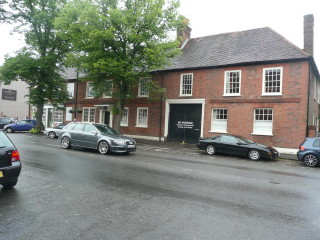 The Bull Inn was positioned directly onto the north side of London End and would have been the first coaching inn that travellers came to when they arrived in Beaconsfield from London.  It spanned the existing barns and farmhouse of Bull Farm which was built at right angles to the road.  The farm, also known as the Bull Inn, served ale to travellers before the coaching inn was built.   Joseph Grimsdale (Grimsdell), born in 1623 to a well-known Beaconsfield family, was innkeeper at the Bull Inn about 1650.   He issued his ‘ inn farthing’, a local trading token, in 1658.   In 1662 he lived in a ‘messuage adjoining The Bull Inn’.   He died in 1666 leaving a widow Mary nee Gibbons.  A Londoner, William Willis, took over the Bull Inn and issued another token, a halfpenny token  in 1668.   William Willis was married to Frances nee Gossom of Uxbridge and they had two sons.  One son was baptised on September 20th 1663 and died three years later.  A second son was baptised on 27th October 1668.  Both sons were called William.

In 1756 Carrell Ramsden bought the Inn and changed the premises into a coaching inn by building across the existing barns and farmhouse, making the inn parallel to the road.  The large entrance gates can still be seen today, tall enough to allow coaches to enter.   By 1850 the barns and part of the inn were owned by the Hare family who were wheelwrights, carriers and general dealers. They worked on the site for over 100 years.   Today the former inn, which closed in the mid 19th century, is split into commercial and domestic premises.  Hearnes (formerly The Period Furniture Showrooms) now occupies part of the Inn and two barns, one built in the 16th century and one in the 17th century, are used as showrooms.