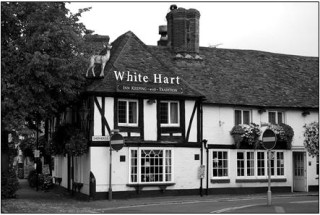 White Hart, one of the oldest pubs in Beaconsfield in 2007
Butler, Pat 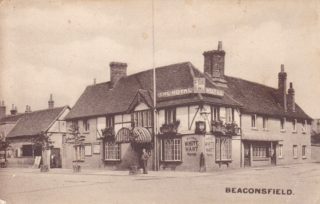 Situated on the corner of Aylesbury End and London End, this historic Inn is little changed and would have been one of the smaller coaching inns, set back almost behind the much larger Swan Inn.  It is believed to have been in existence for many years before its first mention in 1622 when it was owned by Nathaniel Aldridge.  Nathaniel was summoned to the Manor Court and fined 2d (2 old pence) for putting his signpost which encroached ‘on the Lords waste’.  The inn sign is still to this day some distance from the pub.

Many years later in 1725 a widow Margery Wood is recorded as the owner.   However, around 1764 The White Hart was purchased by the Waller family of Hall Barn.

There have, over the years, been many distinguished visitors to the White Hart including Bishops and Archdeacons on the occasion of their ‘visitations’ to the church of Saint Marys and All Saints when they were entertained at the Inn by the Churchwardens.  In Beaconsfield, A History  The White Hart is noted as having extensive facilities for county elites to meet and dine in and by 1881 the inn had been renamed The Royal White Hart.  Throughout the 19th and 20th centuries The Royal White Hart continued as a ‘family and commercial hotel and posting house’.  Today in 2016 the White Hart has undergone recent refurbishment and is now a Travelodge and Vintage Inn.