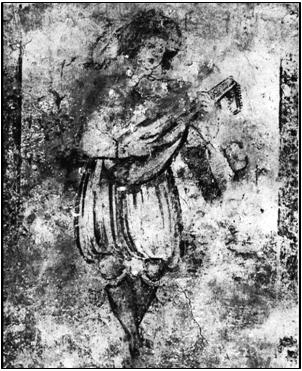 The Swan Inn was a large coaching inn situated in London End and is not related to the Old Swan public house which is now also in London End.  The Swan Inn stood opposite the Saracen’s Head and was a two storey building with the upper floor projecting out over the street.  It had a massive timber frame with lath and plaster walls between the timber uprights and may have been the largest inn in Beaconsfield.    The original external walls of wattle rotted and were replaced by a single layer of brick in fill between the timber uprights.  Internally the lime washed walls were papered.  Map maker John Ogilby cited it as an excellent example of Beaconsfield’s ‘several good inns’.

The Swan Inn is first mentioned in 1611, although it was probably built at the end of the sixteenth century.  Sometime during the 17th century, it was bought by the Waller family and it traded for almost one hundred years but closed in 1700 and was subsequently sold along with other property following the death of Edmund Waller, the poet’s son.  In  1701 the Court of Chancery, who was handling the sale, details its already conversion into ‘several tenements’.   These were sold to John Fawcett who, in turn, left them  to his nephew John Hartley, a draper in High Wycombe.  The premises were of good quality as Hartley insured them in 1725 for £1000, a considerable sum of money.  The row of shops and houses was eventually sold to Robert Charsley in 1786 by John Hartley’s grandson.

The elegant 17th century paintings were discovered in 1966 during renovations to No. 1 London End which was part of the Swan Inn and were validated by the President of the Royal Archaeological Institute, E. Clive Rowse.  On a brick chimney, which had replaced an earlier wall, a painting of a woman, holding a book or mirror dressed in a long skirt full sleeves and a comforter over her bodice, was found.  Unfortunately this painting could not be moved and was lost during the renovations.  However other paintings, found in a chamber accessed via a passage from a neighbouring building, were able to be removed and are now in Aylesbury Museum.  They depict a lute player with full breeches and hose tied at the knee with garters. He wears a Rembrandt-type hat.   Another is of a man with a hawk or hooded falcon on his right wrist.  These paintings also detail fruit, birds and flowers in tapestry style which was fashionable in the 17th century.  These beautiful paintings would have decorated the bedrooms of the west wing of the original inn, overlooking the crossroads.