You are here: Home>Beaconsfield History>Churches>St Thomas, Holtspur - the early years 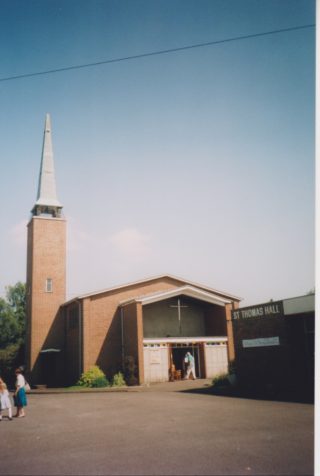 If you visited Holtspur in the early 1930s you would have found three farms situated along Holtspur Top Lane and very little else. Development was only just beginning and houses began to be built from what is now the Harvester (originally the Kings’ Head ) up to and including Holtspur Close and Ivins Road on both sides of the lane, along with a couple of shops and a garage on the opposite corner to the Kings Head. Many of these original houses are still there. However, towards the end of the war a small number of prefabs were built in Mayflower Way (these were replaced in the early sixties by houses and flats) which already had a couple of houses built at the end of it. This small community was in the ecclesiastical Parish of Wooburn, although there appears to be no Holtspur people on the Wooburn parish register and, in fact, the area was served by the Reverend Roulth, Rector of Beaconsfield.

Several far-sighted people began to realise that this area would continue to grow as the war ended and more homes were needed. The churches at Beaconsfield and Woburn were a considerable distance for many people to travel, remembering that private cars were not readily available due to petrol rationing and the buses were few and far between, especially on a Sunday.
Despite the austerity and shortages at the end of the war, the residents of Holtspur started a Church Fund, subscriptions were invited, fund raising events took place and donations were encouraged. But where to build the church in what was still a rural area? The chosen site was in Mayflower Way and adjacent to the footpaths that led to the station and the new town. The land was rented from Lord Burnham at a peppercorn rental of ten shillings (50p) a year.   The original wooden church, which seated 80 people, was erected in 1949 at a cost of £1000 by volunteers led by Mr S Strickland. It was decided to call it St Thomas as the joining of Holtspur to the parish of Beaconsfield took place on St Thomas’ day (21st December) and the first service was held on the 20th December 1949. Although the building was primarily a church, the need for a community hall was soon apparent and the new church took on this role as well.

Need for a new church

As Holtspur grew in the 1950s the little wooden church did not have the same appeal to the new residents and the need for permanent brick built church was becoming urgent; the congregation was also beginning to outgrow the little church. In 1958 the land adjacent to the then church was finally purchased from Lawson Estates for a modest price and Lord Burnham donated the site on which the wooden church stood so that freeholds of both sites were conveyed to the Church Commissioners in 1959. The foundation stone for the new church was laid by Enid Lady Burnham on June 10th 1961 with the service of consecration conducted by the Rt. Rev Harry Carpenter, Lord Bishop of Oxford on December 21st 1961, St Thomas’ day. The marble altar, a gift from St Michael’s congregation was also consecrated as was the font, a gift from Holtspur Young Wives’. The new church seats 240 people and has a spire with a weather vane on the top.

Out of the ashes

The old wooden church continued to serve as a much needed church hall. However on a fine dry sunny Friday in July, a fire broke out, probably caused by an electrical fault, and totally destroyed the wooden building. A new St Thomas’ hall was built after an intensive money raising campaign and the opening ceremony was again on St Thomas’ day, December 21st 1970. The hall has been in regular use ever since, providing a welcome service to both the church and the community.

St Thomas Church stands today as a happy and united church, always ready to welcome visitors and newcomers, looking towards the future and whatever changes and developments are to come.

A longer version of this article can be seen by clicking the link below.