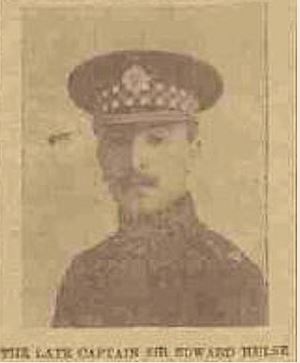 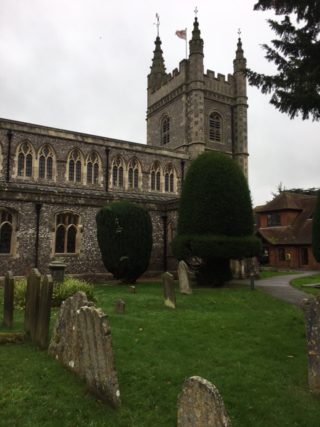 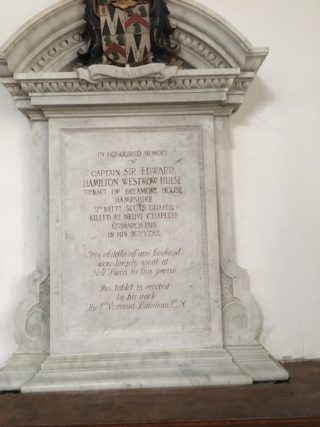 Memorial is on the south side of the church
Clare Bull

In the south aisle of St Mary’s Church, Beaconsfield is a crumbling memorial to Edward (“Ted”) Hamilton Westrow Hulse, only child of Edith Maud, daughter of Sir Edward Lawson of Hall Barn.  In 1888 Edith married Edward Henry Hulse of Breamore, Hampshire, heir to a baronetcy.  It was not a happy marriage and, following her mother’s death in 1897, Edith and Ted spent much of their time at Hall Barn where she undertook many of the duties in the town formally performed by her mother.  Ted attended Mr Marcon’s school nearby.  His father did not return to England after serving in the Boer War, and when he died in 1903, Ted succeeded to the baronetcy.

Whilst serving as a Captain in the Scots Guards in the First World War, Ted sent detailed accounts of his experiences to his mother.  In 1914 he wrote of “the most extraordinary Christmas in the trenches you could possibly imagine.  Words fail me completely in trying to describe it but here goes!”  Two days previously his regiment had relieved the Grenadier Guards and “the usual firing took place and the sniping pretty brisk”.  On Christmas Day there was virtually no shooting and, at 8.30 in the morning, he saw 4 unarmed Germans leave their trenches 350-400 yards away and advance towards him.  With 2 of his men he met them midway.  Their spokesman said they thought it only right to come over and wish the British a Happy Christmas.  They chatted for about half an hour.  Teed agreed to him writing a postcard in English to his girlfriend in Suffolk where he had left her and his motor bike.  Returning to our lines Ted went straight to Headquarters, made his report, and posted the card.  When he returned to his trenches at 10 o’clock, he found about 150 British and German troops midway between the lines, with one side singing “Tipperary” and the other “Deutschland uber alles”.  He saw other such groups and the same was happening along the Western Front, with some even playing football.  All exchanged gifts and addresses.  “One of our fellows offered a German a cigarette.  The German said “Virginia”?  Our fellow said “Aye, straight out”.  The German said “no thanks, I only smoke Turkish”.  After joining to sing “Auld Lang Syne” the two sides returned to their trenches and war was resumed.

This article was first published in The Beaconsfield Advertiser.