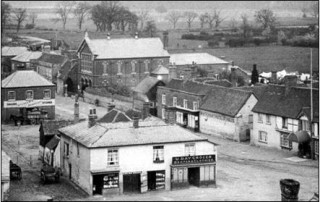 Days Store situated on Aylesbury End facing the Four Ends crossroad. The Lock up can be seen behind the Store. 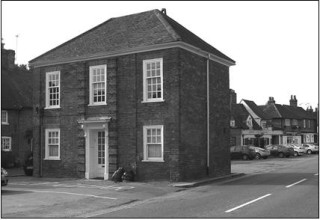 The lock up house for public offenders known colloquially as the ‘Lock Up’ is situated in Aylesbury End and was used, among other things, to house pick pockets and vagrants apprehended at the adjacent market.   Built in the 18th century, it was on the ‘Lords waste’ leased by Hall Barn to the parish of Beaconsfield for 1/- a year.  It was conveniently situated as prisoners were taken from there to be tried at the nearby Saracen’s Head, where the Court used to meet in the inn parlour.

After the police station was built in 1870 it was used firstly as a warehouse and, subsequently, as Girl Guide Headquarters, having been altered by having larger windows installed.  Just before the Second World War it became the Estate Office for Hall Barn and continued to be so until 1996 when the Estate Office was relocated to Home Farm on the Hall Barn Estate.

It is now occupied by Nigel Briggs & Co. an estate agent.