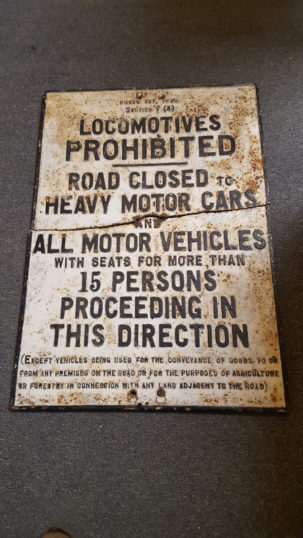 This street sign was given to the Society in 2011 by Paul Wood, the son of Alan Muir Wood, who had been a member of the Society in the 1960s.  The sign stood in the Old Town, at the end of Shepherds Lane, next to the White Hart until about 1960 when it was removed suddenly.  Paul’s mother tracked it down to the Council’s scrap yard and, after some negotiation; she was allowed to remove it to their home in Stratton Road where it stood for some years until the family moved to Pangbourne. When it was broken in two is not known.

Despite having many photos of the Old Town and the White Hart, the Society has none actually showing the sign in situ.    Before the railway came to Beaconsfield, there was a bus stop outside the White Hart which took the townspeople to Slough to get the train.  Perhaps it was thought that the bus would take a short cut through Shepherds Lane – hence the sign.  Or maybe it was because Shepherds Lane is so narrow.

If anyone know any other information, or has a photograph showing the sign at the end of Shepherds Lane, we would be delighted to hear from you.