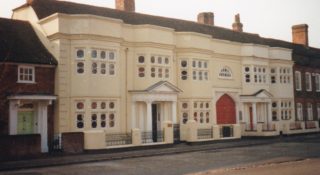 The Crown Inn was situated on the south side of London End almost directly opposite The King’s Head, and not only were there family links between the two hostelries but, for well over a hundred years, they were both very popular coaching inns in Beaconsfield.  However, by the end of the 18th century these two inns had closed and their respective buildings had been converted to residential dwellings.

The Crown Inn was originally a timber framed building with two wings extending back from the road.  An inventory taken in 1669 indicated that The Crown had become an important coaching inn with extensive stables and well-furnished accommodation for travellers, comprising 13 bedrooms with a total of 24 beds the majority being four-posters.  By the late 17th century its appearance had been transformed by the addition of an elaborate cement-rendered façade, incorporating 5 bay windows with a central coach area and semi-circular window above.

Mention of the ‘Crowne’ was first made in 1510 and it is believed to be one of the earliest inns in Beaconsfield.  By the 17th century the inn was occupied by the Rutt family, and during this time Michael Rutt bought the large house on the opposite side of the road and converted it into The King’s Head.  He gave the tenancy of The Crown to his son, Lawrence, who then moved to The King’s Head after his marriage in 1669.

The Legend of Claude Du Val

Highwaymen frequented the main coaching road between London and Oxford, with Beaconsfield often being seen as a safe haven to reach after passing some of the notorious danger spots along the way.  However, many of the inns in the town, including The Crown, were visited by highwaymen.  Amongst them was Claude Du Val, renowned not only for his cunning but also for his gallantry and courtesy, who on one fair day, pulled off a daring stunt.   According to legend he saw a farmer enter The Crown with a bag of money under his arm.  He bribed the ostler to let a dog, with a cow’s hide on its back, complete with horns, down the chimney.  The room was full of young men and maids dancing, and as the dog rushed around to their shouts of ‘the devil, the devil’, Du Val seized the farmer’s bag containing £100 and made off!

Closure of the Crown

The Crown remained as a coaching inn until the mid 18th century when it closed and the building was converted into two residences called Burkes House and Burkes Lodge.  The Du Pre family of Wilton Park owned the building for more than a hundred years, and both dwellings were rented out to a succession of wealthy individuals.  In the late 19th century Burkes Lodge became the residence of James Gibson, a lawyer, who married Ethel Rigby, a lady famed for her sporting activities.  Prior to moving to Beaconsfield she had cycled across much of Eastern Europe and has also scored a hundred runs at Trent Bridge as a member of a women’s team against an all male eleven!  Following her marriage she became a tennis coach to the Astor family at Cliveden.

The façade of the building remains very similar to the renovation work undertaken in the 17th century.  It has continued to be used as two separate residences and are now occupied by offices.